The Kids' Lit Quiz is an annual nationwide literature competition in New Zealand. Year 7 and 8 students compete in teams of four against other schools in their region, and the winners take part in the national finals, held during the Storylines Festival of New Zealand Children's Writers and Illustrators. My school, Liston College, had entered for the first time in 2002. Rather disappointingly, we were only middle of the field. This year, we determined to be better. This year, we determined to be battle ready...

Liston College is a Year 7 - 13 Catholic boys' school located in Auckland, New Zealand. With approximately 200 Year 7 and 8 students, we decided to generate as much enthusiasm and involve as many boys as possible in the Quiz by holding class heats and competitions.

I think the key to reading success is enthusiasm. Very few students will enjoy reading if you tell them they must, that it's good for them. Treat them as intelligent beings, enthuse about books you like, and let them decide that they might be interested. Students are curious. Could they be missing out on something good, by not reading?

With seven classes in the Year 7-8 school, we organised two teams of four from each class. That's fifty-six students. The boys were a mixture. Some of them genuinely liked reading, some just wanted the limelight. Others thought it would be a good way to get out of class. I thought it was great. It didn't matter what their reasons were. We gave the teams fierce warrior names, such as the Crusaders or the Eagles, and rostered them into a round robin competition for a literary battle.

Students would face up against each other during form-time. Their classes clamoured to be the chosen audience. The library where the competition was held had only a limited capacity, so to be audience was a sought after reward.

At first, the teams thought it a bit of a joke, answering questions about books (!), but then the competitive spirit kicked in. Hey, how could those students be beating them? Why did the audience seem to know all the answers? The team members blinked, rolled up their metaphorical sleeves and waded into battle.

Library borrowing increased. As librarian, I was bombarded with queries on good books to read. Their classmates gazed with awe and offered to take the place of any team member who had the misfortune to be absent. Impromptu war dances were done by the winning teams of each session, and students rushed to see the results as they were posted on the library door.

The science department lent their support and had their Year 9 students design a buzzer system that could be used in the heats. These went through four incarnations, starting out as a simple lever attached to a battery and sound box, ending up as an integrated system, complete with flashing lights, sound, and cut-out switches. Students had as much fun using the buzzers as beating their rivals in the knowledge stakes.

The heats concluded, the victorious team was feted with chocolate and adulation, and the teachers and I now needed to choose the top eight students who would represent Liston College in the Auckland regional finals. Statistics had been kept on which students answered the most questions, and in what categories. This was to be the basis for the choice of our final teams.

Liston College did well in our regional heat. Seventh out of ninety schools, and the highest scoring all boys school in the Auckland area. Will we do it all again next year? Absolutely. Will we score as high in the Auckland finals? No idea. It doesn't matter how well we do. We have already won, by giving our students the enthusiasm to read. 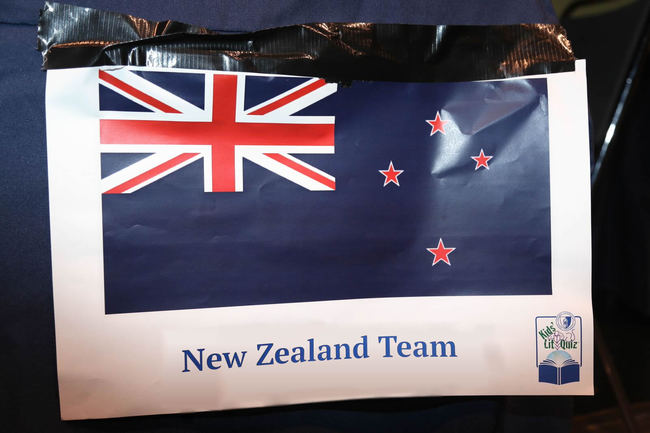